The MUST WATCH Full Feature Film ALIENS on Earth

This Full 2 Part 2 Hour Long Nibiru-Elenin.co.uk  Film Documentary is a Must Watch for enthusiasts and Researchers in the Aliens and Top Level Governments infiltration by Aliens. YOU think the Aliens running Earth idea is Hogwash ?  Well this Film is produced to bring key earth happenings and issues to your attention, so as to make you keep a very open mind to the Theory.

Its made in 2 parts due to its length a single Video file is way too much for smooth flowing and even YOUR viewing, Part 1 was on YouTube But NOW we have been banned for truth telling. , Now parts 1 and Part 2 is on our own server as Youtube blocked it under a copyright claim.And NOW Banned us. So sit back grab your Snacks and drink and enjoy.

NEW in 2018 a 7 PART "WHO RUNS THE WORLD" FULL MOVIE SET On.  www.SlavePlanet.net our Main Website LINK BELOW This tells all and a wake up call.

PART 1 of Major 2018 FILM SET On The Who and the WHY RUN THE WORLD & Want us Culled and slaves with Fake news Vaccines and health issues. and more..

The MUST WATCH Full Feature Film ALIENS on Earth 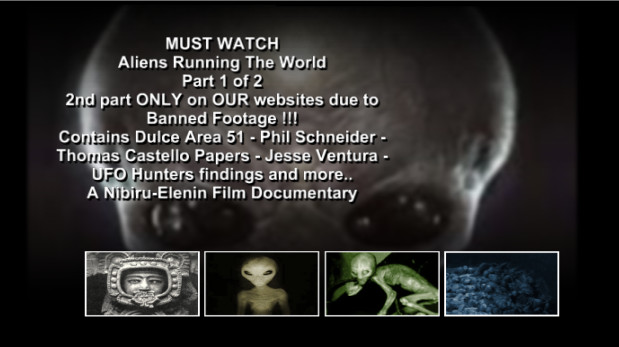 We have 25 guests and no members online