In this section we have a Basic DIY tutorial on Reading the Earthquake Global Monitoring system, So you can keep abreast of EARTH as "THE GREATEST SHOW ON EARTH" Gets in full swing..  BE SAFE and Warned DO NOT Wait and suffer gay Baldy Twat Moderators on live feeds on youtube.  NO NEED !  Simply Install this excellent Program and CHECK as and when "YOU" Want..  Play your own quality Music and get FULL In depth Earthquake Updates as and when YOU Need It.

FREE Version is ok BUT ! The $ 20 version gives you so so much more and access to "WORLD" Data feeds, well worth the Cost..

"THE FREE VERSION DOES NOT Give you access to the Worlds feeds !!  So you only have half the Picture !! "

UNSURE WHAT THE FULL VERSION  gives you ?  Watch and see the demo video below..

CHECK OUT -   THIS SECTION and LEARN  why earths ramping up.. (Will open in NEW window So you still have this open also)

Ok So your wanting to have advance warnings of Potential damaging Earthquakes ?  MAYBE You are living near a known FAULT Line ?  Or Maybe your awake that Earth is reacting to Something way bigger from Space ? and want to spot the clues on earth. Or maybe YOUR Just Thinking "Heck if i put that on a live stream video i could make money for just letting it spin around with music ?  Whatever the reason a basic Idea of what and How to spot signs is VITAL.

So this section we show by a few examples and try to give you a Basic Understanding of Earths Earthquakes Monitoring EARLY Danger signals. 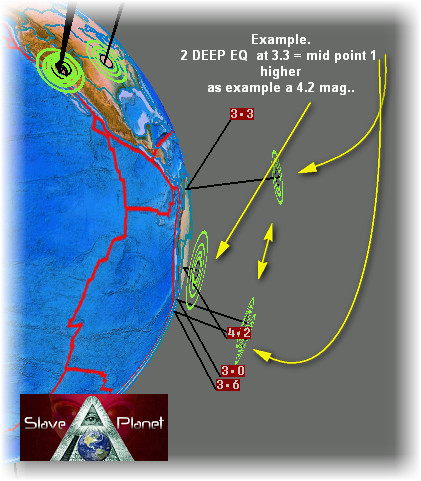 In The above Example see You had 2 deep Earthquakes with a Stretch between?  When you see DEEP far apart Quakes, its only a matter of time before a shallow very often higher magnitude Hits, In this case the 4.2 shallower hit, as shown in Pic. 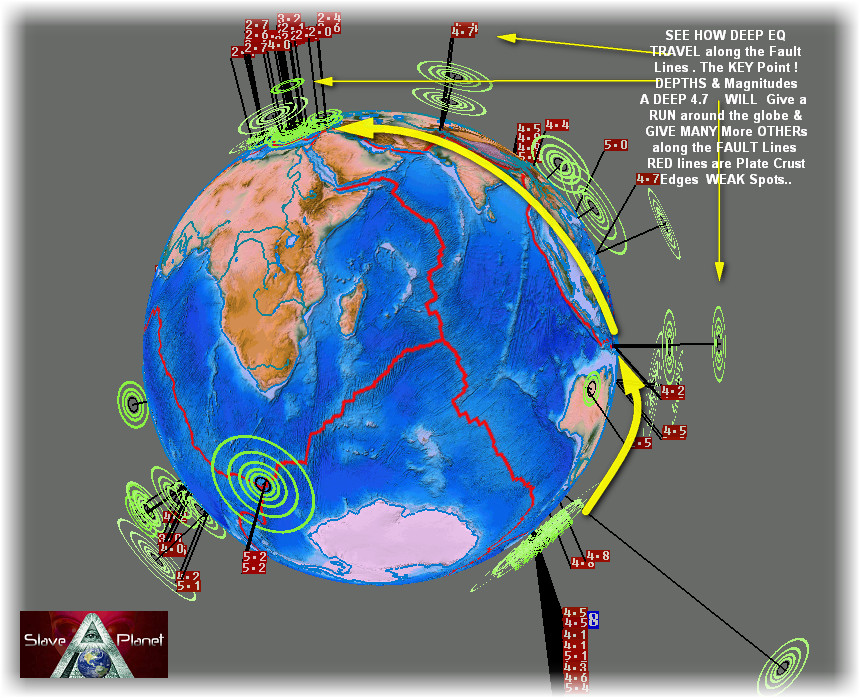 With The Full version to assist you learn and judge the Plate Boundaries are shown in red, This aids you to understand which way movements will travel, again in the above example, this shows this. 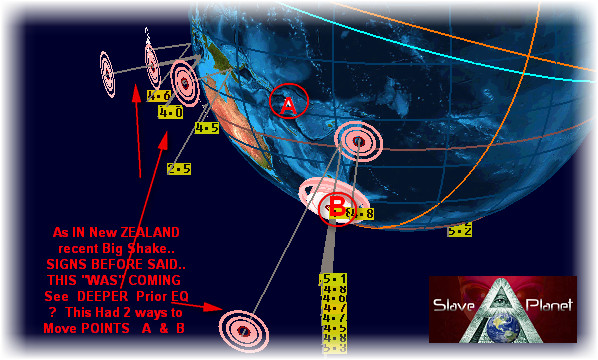 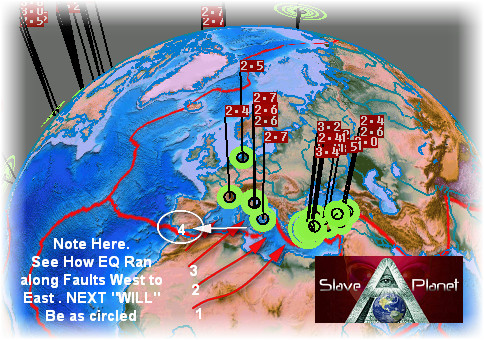 In the above example, see how the ongoing run along the Plate edge was made, here the larger shallow Earthquakes pushed along and always gives rise to lots of further Quakes along the Plates, we know it is certainly to bring a further shallow Quake or even Quakes at point 4. 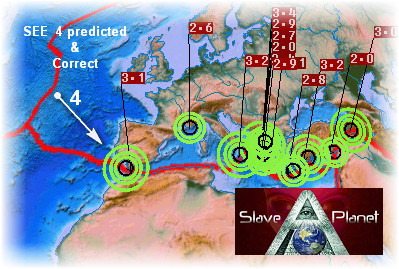 THERE YOU GO !  Did you see and understand the logic ? IT IS NOT Rocket science , Common Sense dictates a deep tear on 2 ends of anything will Run along, same rules apply, as the pressure tears along breaking and moving, until eventual earth break up,lift or VENTING From Volcanoes , with known Fault Line Regions, you can with time predict where major deep Quakes will move and run.

In the above and below examples, See the Blank zone, This is remaining Quiet due to Volcanoes Venting pressure in that region, however we would still expect some shallow activity, BUT the Volcanoes have a very good pressure relief effect, the worst case is they ERUPT .. But thats yet again a whole new story.. 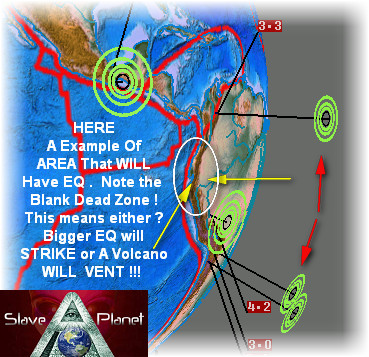 BELOW Using the NEW ZEALAND Major Earthquake YOU WILL SEE,  IT WAS "OBVIOUS" To Most this was To Get the BIG Hits..  OUR ONLY Concern and what People are NOT Connecting is WHY ?  WHY Sudden Increase on Earth ?   Well see below at the POSSIBLE Reason.

ALONG With this SEE Below HOW In Space. The Main Planets all are in relation to each other, THIS Left Earth at the mercy of NIGHT Side Major Pullings, as the Mars Venus and Mercury Magnetics are distracted from earth, leaving it weaker to the Uranus and Possible Nibiru Planet X Pull.. 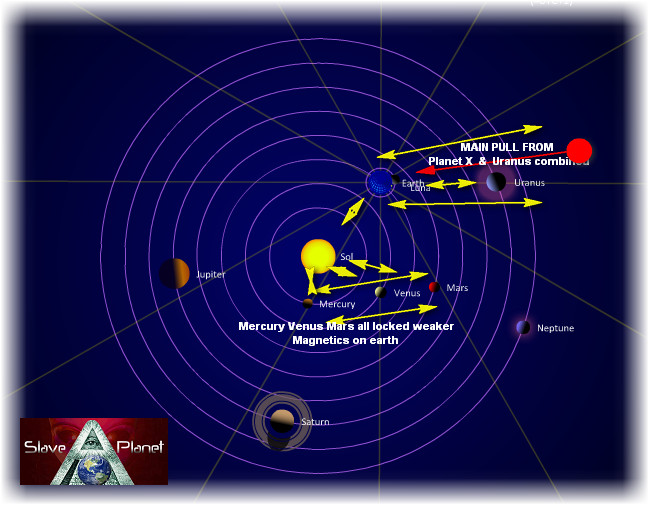 You see why Space has a MAJOR Effect On Earth and so for the FULL picture watch our Space Monitors everything interlinks .. Now Get Your Earthquake Monitor and LEARN , see the patterns and GOOD LUCK as Earths BIG Show commences. Its NOT Technical its BASIC Common sense . Remember the KEY Points and you could become the Best Earthquake Kid or Girl !!!   GO FOR IT ...

INTERESTING FACTs ON Video For you.  EASY Simple Earth Plates and Movement Explained .

We have 44 guests and no members online