Red Planet Mystery Planet again captured, in this Presentation we show the latest capture and give findings and more information.

Following on with the Planet X Hunt. You may recall from previous Videos, we discovered the Red Planet Object in the Predicted Zone.
Well This is a follow on from further Sky watching & FRESH Pics.

Some Interesting developments have been going on and in this Update, i bring you up to speed with the strange events.

If You recall? This is the MOST Likely Entry Position, and as such we have 3 Watchers Covering this zone. This is also the region we found the Red Planet Object. With Clouds and weather helping , The Mystery Object Planet
was again captured. 15th Feb 2017

POINTS WE WERE WANTING TO CLARIFY. & WHAT THIS VIDEO REPORT will Address..

2. Finding the Red Planet again., to dispel the fluke theory.

3. Any other movements of surrounding stars Planets.

4. Any EARTH Signs which connect dots as to position &
If indeed both Position Crop Circles Showed as entry
Region, is correct etc, are still verified by Earth & Space
Signs - Clues.

3 Seperate Pictures CONFIRM Uranus "IS" still where it should be. We was hoping to have some close ups to see its condition, But in some weird strange twist the Researcher after getting a warm reception initially has been cold shouldered and had his remote access to the BIG Scopes denied ??

WHY we wonder ?  Reports are his access id and passwords have been blocked !!  Coincidence ?  WHO KNOWS ? "So still all we can rely on is our own Equipment & cameras."

2. Finding the Red Planet again., to dispel the fluke theory.


YES From Italy on the 15-02-2017 Luca Grabbed it, using a long time exposure , The Planet Object showed. Excellent work we figured, Roberto can now do his calcs and we know if it is the elusive Second Sun - Nibiru - Planet X it must be further inwards and as such bigger diameter .

Its Position is still in target Region, BUT !! It has moved position. Again to me, it is NO Surprise, it is a moving object.

However Roberto reported back NO it is now smaller ..  So he is not satisfied it is Planet X . 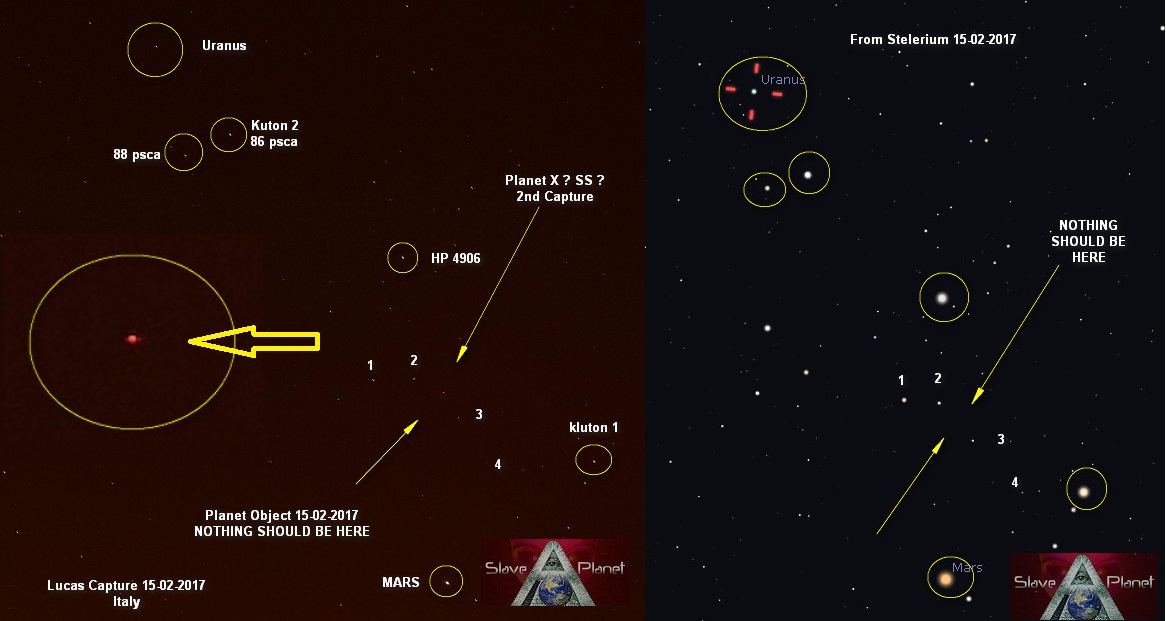 Here You will see part of the original full sky capture, and spot the small Red Planet. maybe hard on video to see but she is there.

Even when glare reduced and what looks like a small object alongside, Roberto still insists NO To small. and so as we stand at present, "we are NOT convinced and need more time and captures." 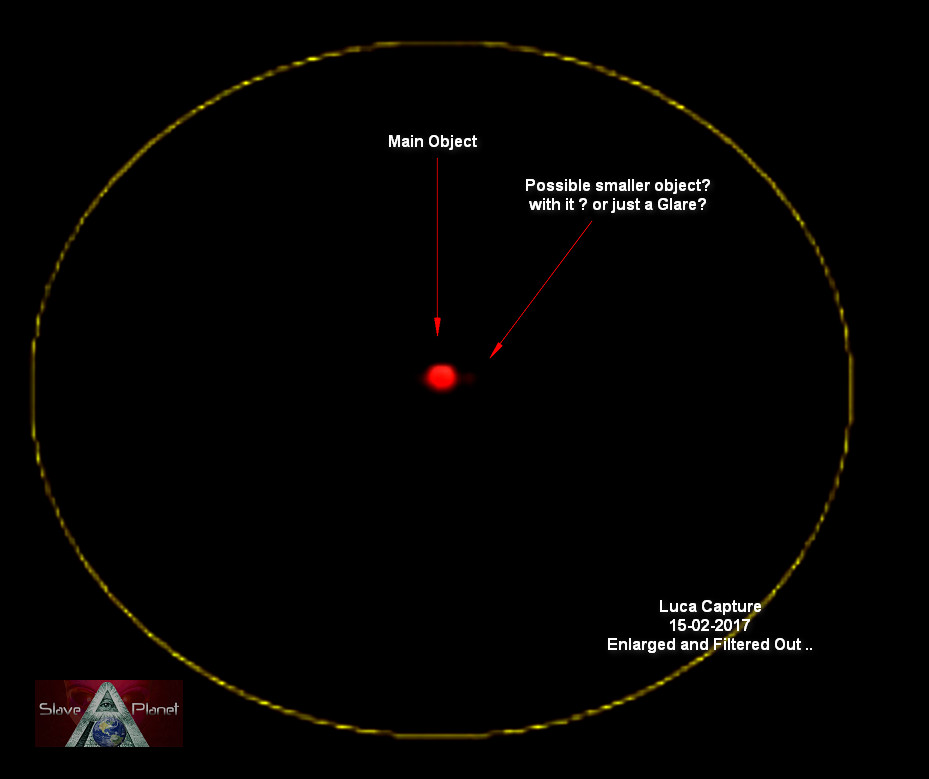 This is the reason Roberto is NOT convinced. see how small it is still ? Surely i tell him depends on how long exposure is?  NO he insists, it should be larger. See on this pic, how other objects move during time lapse pic. But this object does not..

Roberto agreed movement is correct. but not size. "BUT Yes we all agree we need more photos."

So there you are, we are on this full time, weather is screwing us. BUT, many hands are on this so you can be kept informed.

The situation is this could just be a nothing red planet going about its business, we need to follow it more, so stand down on panic stations, at ease people...

WILL Update as and when news is coming good or bad ..

3. Any other movements of surrounding stars Planets. " NONE " This is another reason Roberto says NOT Convinced. Again a reason We NEED More captures before being certain .

From watching and expecting certain things to happen from the predicted incoming Second Sun - Nibiru  - Planet X, Something i was expecting which has been confirmed is how and despite what many say, i have noticed apart from the weather, which is and has been crazy!!

Earthquakes !!  The depths, are NOW "NOT So deep" and not as many deep ones, seen !!

When you see the following this is exactly what i would expect, as EARTH Now is being shielded by the SUN & Other Planets.and further away. You will on the video simulation, See how Earth is now going away from Uranus direction. Kind of shielded, the Sun is open but Earth i feel should Relax. Yes Earthquakes will still rumble, they always have and will BUT watch the depths !!  I expect shallower stuff.. THE SUN is what will be of interest, how it reacts. 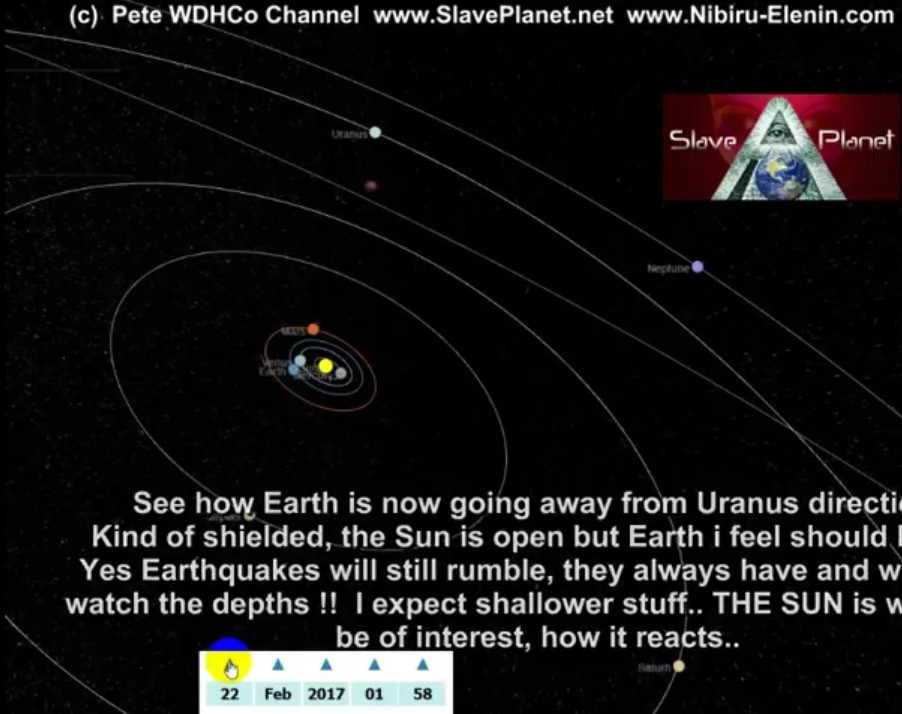 Stay Tuned for latest Updates as we further stay on the Planet X  Second Sun Trail...  God Bless Stay Informed & Prepared..
MY GOAL !! is To either NAIL Planet X.  or dispel it !!!  before i snuff it !!!