Read the article posted in Space Weekly 1936 and the 1960 Russian discovery in this in house video film, Also recently captured UFO activity as they enter and leave there  underground bases . Also a exclusive find by a enthusiast Moon researcher captures Craters on the Moon pulsing !!

A heavenly body possibly as large as the giant planet Jupiter and possibly so close to Earth
that it would be part of this solar system has been found in the direction of the constellation
Orion by an orbiting telescope aboard the U.S. infrared astronomical satellite.

So mysterious is the object that astronomers do not know if it is a planet, a giant comet, a
nearby "protostar" that never got hot enough to become a star, a distant galaxy so young that
it is still in the process of forming its first stars or a galaxy so shrouded in dust that none of the
light cast by its stars ever gets through.

"All I can tell you is that we don't know what it is," Dr. Gerry Neugebauer, IRAS chief
scientist for California's Jet Propulsion Laboratory and director of the Palomar Observatory
for the California Institute of Technology, said in an interview.

The most fascinating explanation of this mystery body, which is so cold it casts no light and
has never been seen by optical telescopes on Earth or in space, is that it is a giant gaseous
planet as large as Jupiter and as close to Earth as 50 trillion miles. While that may seem like a
great distance in earthbound terms, it is a stone's throw in cosmological terms, so close in fact
that it would be the nearest heavenly body to Earth beyond the outermost planet Pluto.

"If it is really that close, it would be a part of our solar system," said Dr. James Houck of
Cornell University's Center for Radio Physics and Space Research and a member of the
IRAS science team. "If it is that close, I don't know how the world's planetary scientists
would even begin to classify it."

The mystery body was seen twice by the infrared satellite as it scanned the northern sky from
last January to November, when the satellite ran out of the supercold helium that allowed its
telescope to see the coldest bodies in the heavens. The second observation took place six
months after the first and suggested the mystery body had not moved from its spot in the sky
near the western edge of the constellation Orion in that time.

"This suggests it's not a comet because a comet would not be as large as the one we've
observed and a comet would probably have moved," Houck said. "A planet may have moved
if it were as close as 50 trillion miles but it could still be a more distant planet and not have
moved in six months time."

Whatever it is, Houck said, the mystery body is so cold its temperature is no more than 40
degrees above "absolute" zero, which is 456 degrees Fahrenheit below zero. The telescope
aboard IRAS is cooled so low and is so sensitive it can "see" objects in the heavens that are
only 20 degrees above absolute zero.

When IRAS scientists first saw the mystery body and calculated that it could be as close as
50 trillion miles, there was some speculation that it might be moving toward Earth.

"It's not incoming mail," Cal Tech's Neugebauer said. "I want to douse that idea with as much
cold water as I can."

Then, what is it? What if it is as large as Jupiter and so close to the sun it would be part of the
solar system? Conceivably, it could be the 10th planet astronomers have searched for in vain.
It also might be a Jupiter-like star that started out to become a star eons ago but never got hot
enough like the sun to become a star.

While they cannot disprove that notion, Neugebauer and Houck are so bedeviled by it that
they do not want to accept it. Neugebauer and Houck "hope" the mystery body is a distant
galaxy either so young that its stars have not begun to shine or so surrounded by dust that its
starlight cannot penetrate the shroud.

"I believe it's one of these dark, young galaxies that we have never been able to observe
before," Neugebauer said.

"If it is, then it is a major step forward in our understanding of the size of the universe, how the
universe formed and how it continues to form as time goes on."

The next step in pinpointing what the mystery body is, Neuegebauer said, is to search for it
with the world's largest optical telescopes. Already, the 100-inch diameter telescope at Cerro
del Tololo in Chile has begun its search and the 200-inch telescope at Palomar Mountain in
California has earmarked several nights next year to look for it. If the body is close enough
and emits even a hint of light, the Palomar telescope should find it since the infrared satellite
has pinpointed its position. 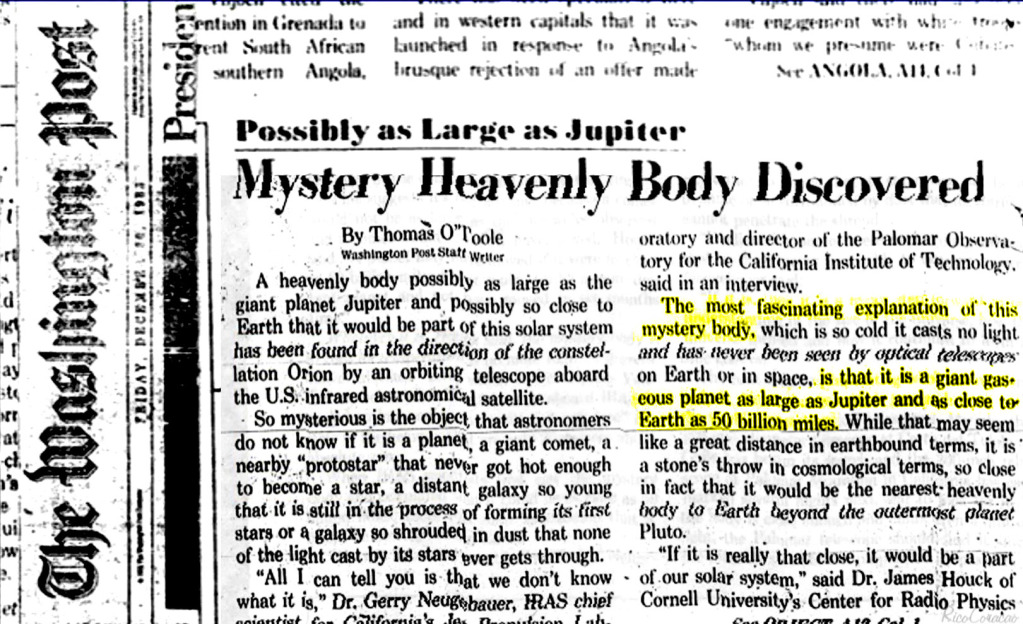 (ITEM 123)December 31, 1983, Saturday, Final Edition
(ITEM 127)The distance from earth of a mysterious object in space was reported incorrectly
in some  editions yesterday. The correct figure is 50 billion miles.

Articles appear as they were originally printed in The Washington Post and may not
include subsequent corrections.