"The sun simulator in space Theory"

In Response to many asking why we do not cover the Fading Sun and its replacement with a Man made Sun Simulator, which is floating in space and pretending to be our normal real sun, Yea i know !!  What crap are these people drinking and eating?  Who knows it just gets funnier by the day.  Well in response to the Question have we looked in to it?  Yes it took exactly 53 minutes and 12 seconds.  Not that it was ever to be a tough one, but yes the subject was looked at but it fails badly, the whole idea is so stupid it is alongside the flat earth as a pure fool the people and waste research resources on the subject.

The subject can be cut down even without wasting 53 minutes and 12 seconds, by a simple question and a FACT..

1.  IF Such technology that can take such a unit and exactly replicate the Sun be required as our own Sun is as they say dying.  Then if such a major thing was happening what could be BETTER for the Power elite and our leaders-Masters than to ask for what they would term, "A Sun protection Tax"  similar to the Global warming/Climate change TAX, who on earth would not hail the leaders as Heroes, if they could save the earth by having a replacement, and EVERY Human on Earth would gladly PAY to save our own Planet.  So the absolute stupidity of they are pretending it is the Real Sun to fool us !  Is SO STUPID its a good indication of just how stupid people are becoming.

"WHAT REASON DO THEY NEED TO FOOL US?"  If The Sun is in trouble and they have a replacement it is ONLY GOOD.THEY WOULD TELL EVERYONE & MILK IT For Trillions"

2. As Per calculations in the diagrams, the size of the Earth and the size of what would be required to replace to "FOOL" all earthlings, would make the Sun Simulator needing to be some 9,000 miles wide, in order to imitate the original Sun, Assuming they placed this in a position to exactly cover our Proper Sun. This Simulator again they say is one of 2 things, either a giant mirror and lense assembly, boosting the dying sun, or a series of light bulbs shining on earth.  Assuming an array of mirrors lenses can be made which enlarges a base start light source, the biggest segment using a 6 to 1 enlargement mirror assembly, would require each lense STILL to be over 1,000 mile wide !!  ANYONE know a Factory unit who could secretly make a 1,000 mile wide mirror or magnifying lens? IF you run with the Electric Light Halogen Bulb theory, a few of the fruitcakes use. Is it a Gigantic bulb again secretly made in a 500 mile wide factory? Or would they use around 500,000 bulbs? who would change them, clean them?  on it goes, the whole thing just gets so stupid.

"THE FINAL Question assuming secret 1,000 mile big Factories exist in secret? HOW Did they secretly lift a section of 1,000 mile wide and God knows what weight? Up in to earths orbit "Behind the Moon" and both assemble and POWER it? and or then further maintain it all ?"

The SUN SIMULATOR Theory has all been DELIBERATELY put out to SEE Just how stupid people are and pushed as a money making theory, feeding on the shall we say NOT So Bright people, of which sadly there is Thousands !!

CHECK the Facts Below.. 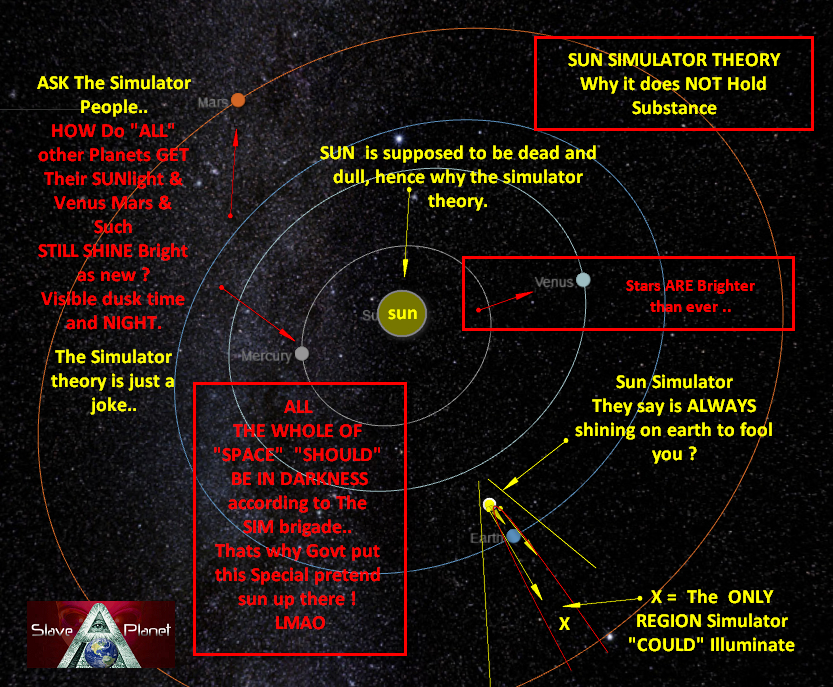 Now further on the Fake Sun Theory, strangely these VERY SAME Fruitcakes, use the actual sun monitors provided by NASA and others, showing flares and objects by the Sun and more.  YET They are saying its a fake sun simulator, as and when it suits?  A CLUE there people!!  Yes convenient..   So if the Sun they say is Fake are these objects by the Fake Sun? These comets that hit the Sun, are they hitting the Simulator but the Sun Simulator has a protected shield etc?  It just gets more stupid the more you delve, and we are only 20 minutes and 23 seconds in !!  Let us move on, still humoring the Simulator loonies..

So The Leaders Earth Controllers have somehow got this shining simulator array in absolute perfect orbit, shining and targetting earth with such precision, shining brightly at earths direction.  Maybe the Sun Simulator experts can explain how Other Planets NOT WITHIN THE SIMULATOR Light field get illuminated so brightly?  As per diagram below.  IF The Sun is so bad and the Elite are fooling everyone on earth, the Sun is so bad they needed to focus its weak light on earth to keep it all looking normal.

"THEN HOW DO OTHER PLANETS Get There own Sunlight? WHEN BEHIND THE SIMULATOR?"

That is more than enough, IT IS More stupid than the people who have swallowed the hogwash, to WASTE any more than 54 minutes of your life on it. Its Pathetic and JUST a distraction to REAL research..

NOW YOU DECIDE.  WE DO NOT WASTE TIME ON FAKE SUN SIMULATOR RUBBISH -  53 minutes is way to long already ..

We have 19 guests and no members online