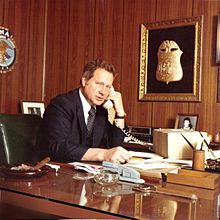 Theodore L. Gunderson (7 November 1928 – 31 July 2011) was an American Federal Bureau of Investigation Special Agent In Charge and head of the Los Angeles FBI. According to his son, he worked the case of Marilyn Monroe and the John F. Kennedy cases. He was the author of the best-selling book How to Locate Anyone Anywhere Without Leaving Home.

Ted Gunderson was born in Colorado Springs. He graduated from the University of Nebraska–Lincoln in 1950. Gunderson joined the Federal Bureau of Investigation in December 1951 under J. Edgar Hoover. He served in the Mobile, Knoxville, New York City, and Albuquerque offices. He held posts as an Assistant Special Agent-in-Charge in New Haven and Philadelphia. In 1973 he became the head of the Memphis FBI office and then the head of the Dallas FBI office in 1975. Ted Gunderson was appointed the head of the Los Angeles FBI in 1977. In 1979 he was one of a handful interviewed for the job of FBI director, which ultimately went to William H. Webster.

Gunderson had an association with music producer and conspiracy theorist Anthony J. Hilder and was interviewed by him on various occasions. The two men appeared at numerous conferences together.[14] They both said that the 1993 World Trade Center bombing was a result of FBI agent provocateurs.

Gunderson was a member of the Constitution Party.

We have 28 guests and no members online