Interesting Work From Roberto of Italy Moving on from his Crop Circles and with knowing Nibiru "2nd Sun" Position.
He moved his attention to Earth and Put his Expertise to looking at the Earthquakes.

Not Just the normal small everyday ones. But The MAJOR Ones, 6+ and above. His findings show a Link to Nibiru.
Watch Video and or Look at Pics and details and see The Findings !!!

THE MOST 'MAJOR EARTHQUAKES (magnitude 6.0 and up)  are taking place WHEN THE AFFECTED AREA TARGETED
under the influence of high Attraction of Nibiru - 2nd Sun. In 7 out of 9 of the ZONEs position 'towards the SECOND Suns "Nibiru" Inward Trajectory !!

In one case the earthquake did 'take place immediately after the area was passed in front of the direction of Nibiru - THE 2nd SUN (2 hours later)
Another case, 'it took place after about 12 hours of passage`, 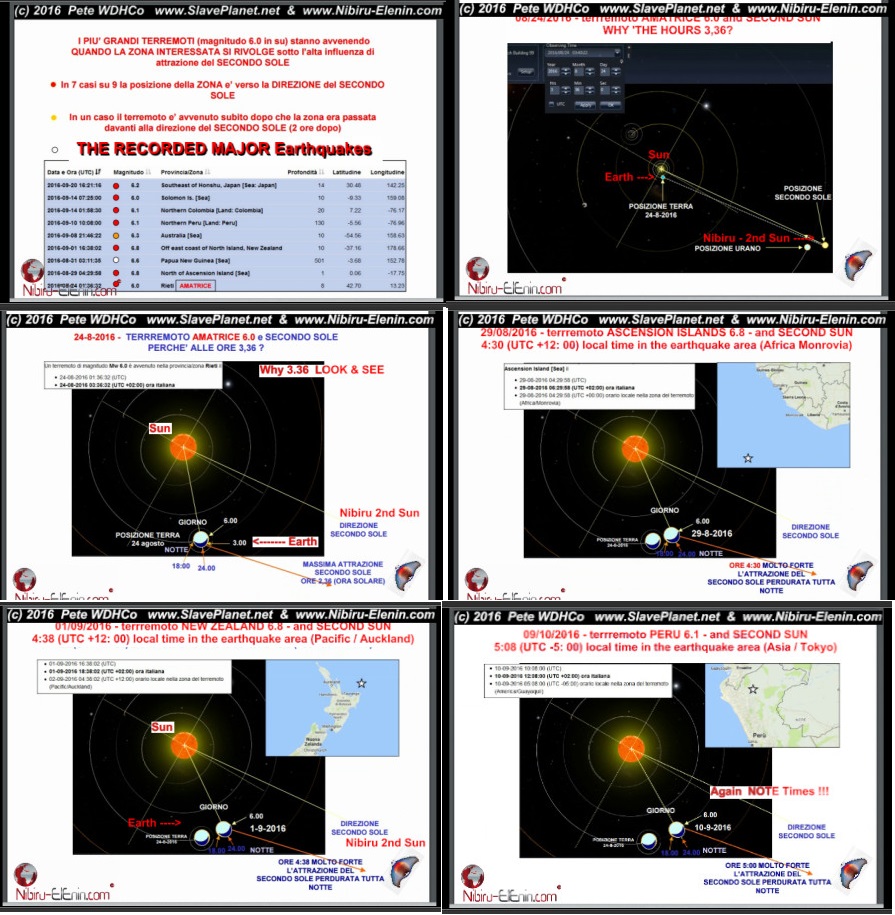 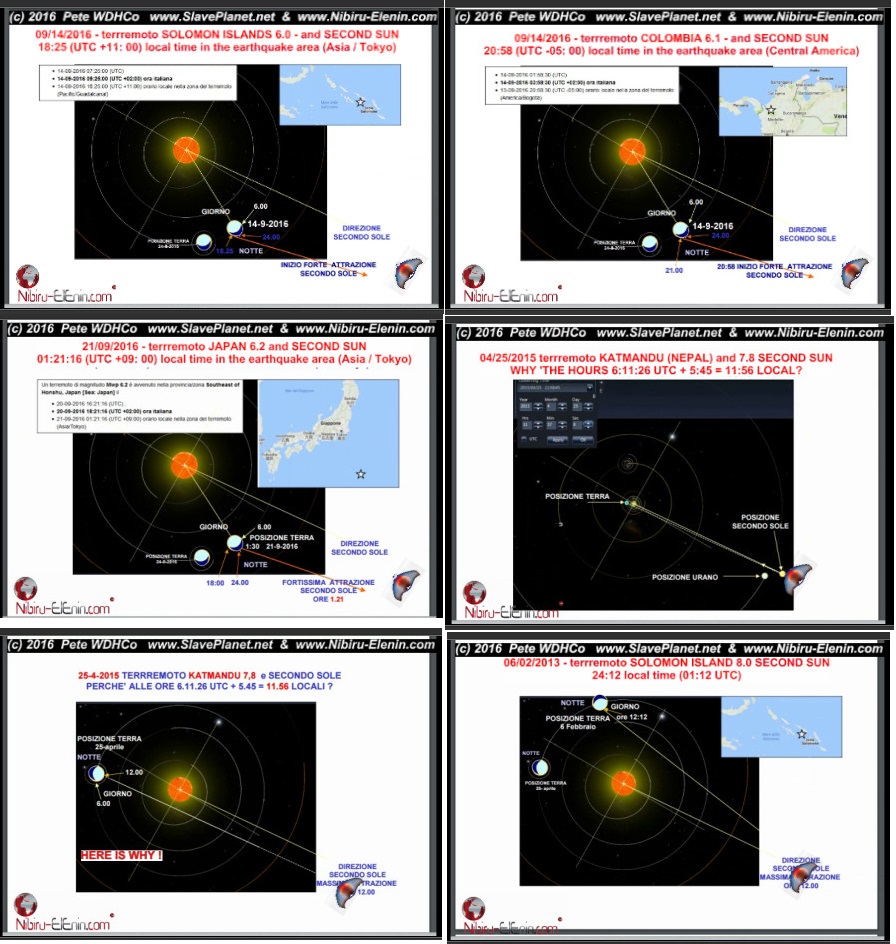 So What does this tell us ? It Appears that MOST 'MAJOR EARTHQUAKES OCCUR WHEN AREA AFFECTED is TARGETED IN DIRECTION OF THE SECOND SUN - Nibiru..

The attraction of the second sun (VERY HIGH) is now beginning to effect Earth a lot more ',
Speaking of the Earth, there is no fixed rule, 'cause we do not know what and how they are put the underlying faults the earth, so, it can 'happen that an earthquake is in an active area even after a few hours by the passage of that area  in front of the SECOND SUN Incoming DIRECTION - Nibiru.

The same applies to the eruption of volcanoes. and it depends on how the subsoil has 'already' been shattered a little 'maybe in several steps the day before and before that. Then comes the straw that breaks and brings all the havoc, and then at that point the new step ahead according to the  direction of the sun. nothing prevents maybe an earthquake occurring even after 12 hours or so, the "directional" passage to the second sun, for reasons we do not know, eg a cyclone ,
a small tsunami, a volcano that comes into activity '.... etc

But I must say that the two disastrous earthquakes, and they have given a good REFERENCE. in addition to earthquakes, you have already 'awakened dormant volcanoes thousands of years. And, dropping the nonsense of science that says that some are inactive for millions of years (while the earth and It was created no more 'than 6000 years ago by the Eternal Father, the fact remains  that have been inactive for always (even if they  were only 5000 years old, they are inactive).

Many Prophecies tell ,Sleeping volcanoes are going to wake up
leaving a trail of destruction.

September 10, 2006 by prophecies Ferreira Brazil
VOLCANOES ASLEEP millennia More 'than 5000 shook central Italy, after the earthquake  of Amatrice & surrounding countries,
of which some repeated over the 4th grade in less than 20 days from 24 August 2016, can not 'more' be considered  IF SETTLING NORMAL. Who has ears to hear.

Data supplied For Roberto by The Seismological center in  ITALIAN: http://cnt.rm.ingv.it/

From The Crop Circles THE Message "IS TELLING OF Earth axis tilt March 2017" . So Is This saying that EARTH Is tilting and will be at that position March 2017 ? Or starts shifting March 2017 ?  TIME WILL TELL and we and Roberto shall be closely looking more in to earth tilts and Pole shifting ..

Heres the Calculations and Crops which Give The Warning.. 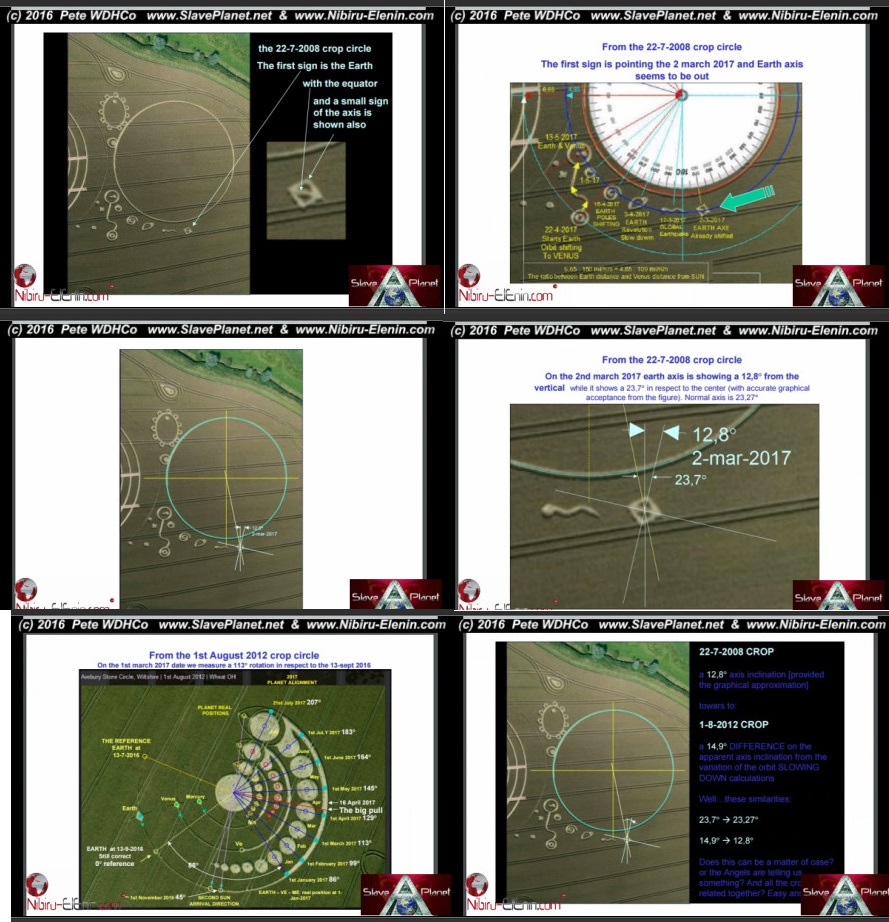