So As you know Roberto has been decoding the Crop Circles and Gave us the Combined Final 2nd Sun Planet X Nibiru final Sun impact of 21st July 2017. We have stuck with this steadfast as it fitted all the expectations.

Following this for the last few months and weeks however has altered our thoughts on this, namely as in March - April predicted has not appeared to follow schedule.

Roberto advised in March to wait til April.  Well we are now at the end of April 2017, what was scheduled for this time line , simply has NOT happened as per the exact dates we were advised.

As BELOW See what we expected and see how it all started, but then the earth seems to have tilted back to only some small 1/2 degree out, another strange thing is we are very surprised

just how quiet most things are?  WHY is a worry, even with some very well known Planet alignments Earth has wobbled and the Sun is doing weird stuff, but NO Mass Major Earthquakes etc,. 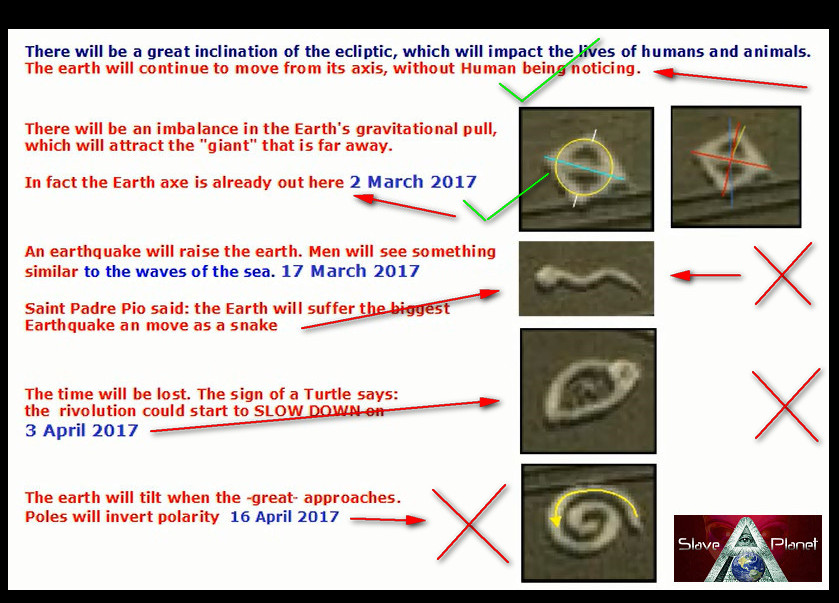 Note, How 17th March - 16th April these signs should have been seen. But Not seen by us.  Does this mean they have occured?  Unlikely, So Roberto was contacted

As as agreed we gave it time to see April out before, calling this out.  Roberto was asked outright his thoughts and explanation, as its duly felt that IF ANY chance of it all being

wrong exists, then it is IMPORTANT people know we can all stand down, and relax and chill again.  Indeed the "SOONER THE BETTER" should the schedule be wrong then maybe with a bit

of Luck, it all could be wrong and 2017 is NOT the Year.  Below is the information from Roberto which he has been Honest and Open with his thoughts and advices to ALL.

I will add, ALWAYS Roberto has said that he is only the messenger of what he decoded calculated and was informed, It was not his job to save anyone and People can take the

findings as they want, it is not a certainty but what is discovered, and signs show, what they show.. How can anyone not share such powerful Informations.

Roberto Thoughts and response from advising we NEED Some clarifications.

"My thinking:
the Angel told me some days ago, that the dates are not postponed, i mean the Earthquakes have been, but not the big one yet that will be soon. The Axis has moved a bit, but not the tilting yet that is on the way slowly on.
The BIG  tilting will start soon also in a rush, before the Great WARNING.
WHAT HE TOLD ME IS THAT all the happenings are MORE compressed together than we thought, so when it will start, no one will be able to understand what is happening because everything will come in a rush. No one will be able to withstand the happenings. So there will be the rapture of the ELECTS.
Now the 14th MAy is ALSO a Sunday where a great Merthyr is celebrated (Saint MAttia), and it is just on the day after the 13th of MAy. the Fatimas century. Maybe this is the Great Warning day. SO i did advise the others.
We need to see the happenings one after the other that will go thru these days. the tilting will be before the Great warning.
the next date is the 24/25 June. But i have not seen any martyr in Sunday 25th, while the 24th is a 36th year of Medjugorie.
So dates are just shifted of few days i think.
About the July date, i am confident this is steady there. But i have not the cristal sphere in my hands, still i think the plans of God are perfects to get the faithfull in test and to have the less possible pain for many others.
I think that we should no worry too  much in letting know others of happenings, but the real thing is to worry about the other's conversion. Else they will wait, they will die and then get lost without saving theirselves, just to shoot with their mobile telephone the comet that strikes the Earth or the anything else to be able to say. i was there!!!
yes you were there, but burned out.
The Angel also told me that the dates given before was to shake up people, but now it is time where the dates will come by themselves in a way that maybe we have not thought of.
People need conversion. So many things on my web has been deleted and just talk to direct persons, as you as an example. No need to do else again journalism news with the end of time sheduling.
In the meanwhile everything is on the way . Israel and Siria & Iran are already fighting over, Russia and China are on the way. Important to read  Craig Robert's article down here. what he says confirms all the relevant Anguera messages predicted." 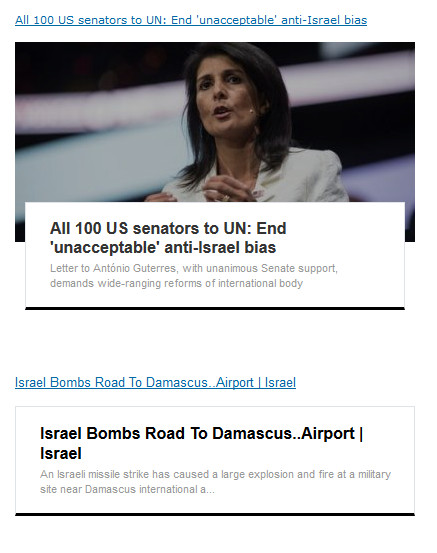 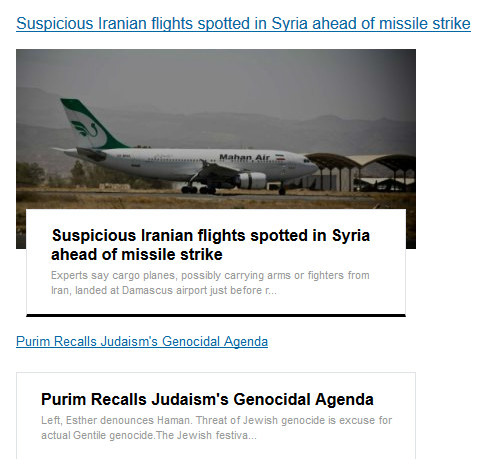 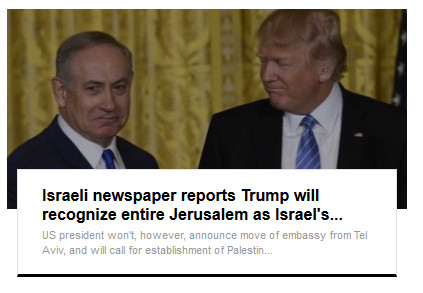 Roberto - Then further wrote as below ..
"Hi Pete
after having answered to you, i just sit down and started to think about what i referred to you and start to pray the first Saint Rosary of the day.
At a glance a message arrived. Very straight and impressive.
after the first ( and maybe there will be a second & third . about this i am not sure) ELEVATION OF THE Elects (THE RAPTURE OF ELECTS),  there will be let's say 6 billions of people left on the Earth,
the total number arrived is 6, but maybe this is only an "EASY TOTAL" (used on the message) to be devided in 2 "PERFECT PARTS". And so it happened.
the first part is 4
the second part is 2
2/3 PLUS 1/3 of 6.
the message was very SORE. very very SORE, a A SUFFERING MESSAGE towards my body.
I understand that the human Beings will be divided in two parts as previously said, both parts will be suffering a LOT, and one of those two parts (do not know which one) will be damned or so. In fact the same is told into the Revelation Book and somthing similar into the 3rd Prophecy of Fatima.
So the message you should give to yours readers is not, how much to wait for the happenings, BUT HOW to be in the SAFE LANE before THOSE HAPPENINGS will be, [Jesus Himself is confirming just right now -while i am re reading for typying and formal errors - incredible but true] and this is a DUTY up  to you, and this is a very hard and heavy duty that has been given to you. As it happened to me in a similar way.
Take care
pray and ask for the Holy Spirit to drive you and suggest you
roberto
p.s..  take care that confusion is also in my mind. It is normal, because God's plans are not our plans, and we do not understand all."
During this time over the Past weeks, Argie and Roberto have been having serious discussions with fresh pictures trying to exactly see where the 2nd Sun and its Dragon companions are, NOT Easy with reversed space locations
clouding sky positions etc, add to that the translation problems of  Spanish to Italian to English back to Spanish to Italian,  but the good news is some headway has been made and soon hopefully a report on that can be brought out.
Latest Pictures of the Dragon (the Argie Argentina Option) have been given to us, which will again soon hopefully follow in a feature, this system i am told is STILL in situ, and still following as projected, the final outcome of this one
never had any dates and Roberto and Argie are heading nearer to a second Planet system rather than all part of 1,  So lots going on there and reports will follow.
1 very interesting thing we found was a a copy of the original 1983 NASA pic which started the Nibiru thing in the 80´s,  nothing special about it unless, you take Argies Pictures and do some comparisons as below.
SO STAY TUNED.  Roberto may be losing ground to Argentina, ONLY time will tell.. 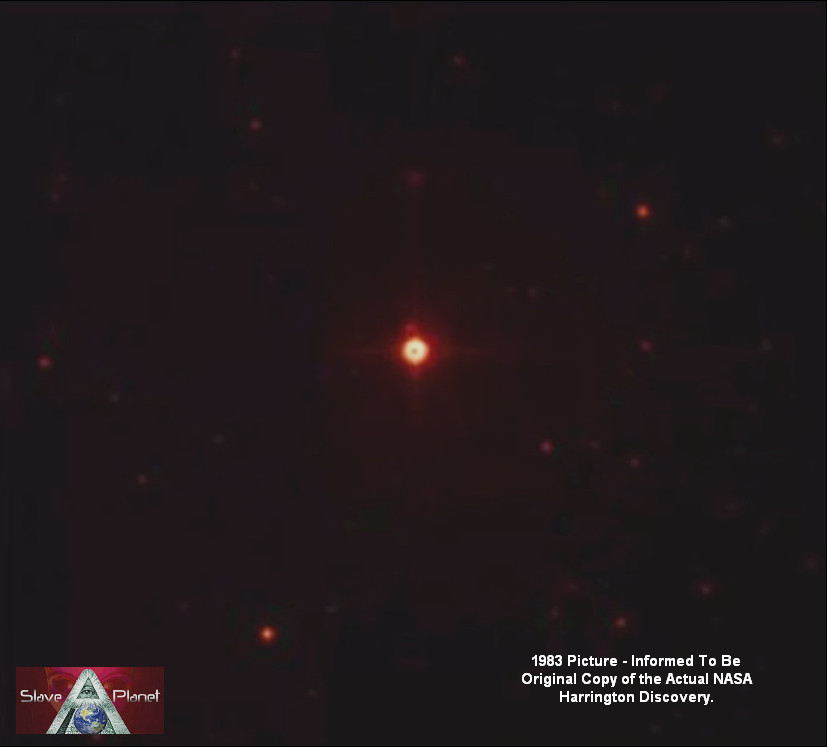